Rep. Ro Khanna on TYT About Build Back Better Fails

Did you all see Cenk’s interview on the main show with Rep. Khanna? What did you think? 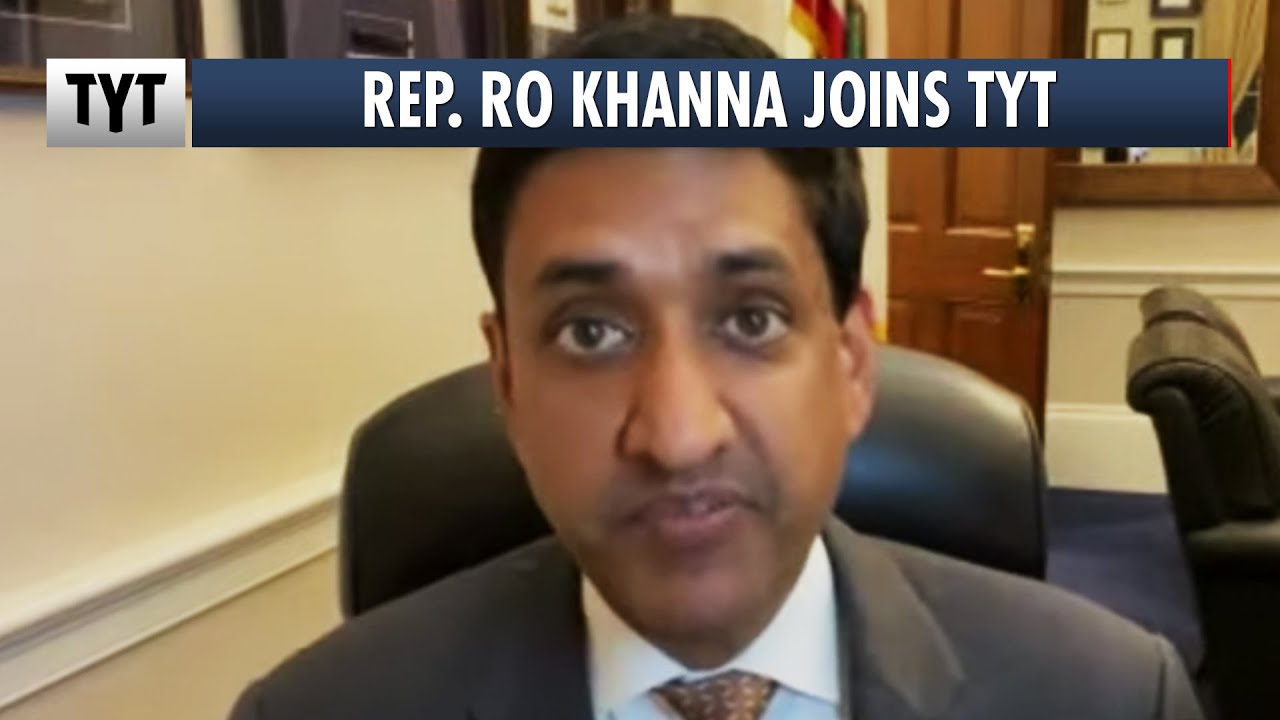 The interview was a slap in the face on the state of the Progressive party. A wake up call letting us know that we are still way behind.

With that in mind, I have adjusted my hopes and left my expectations open.

I want Progressives to learn a lesson.

I want the idealism to be crushed.
It’s not that idealism is bad, but we need to temper it with realistic goals, and stop thinking about manners. Manners is the trap, you fall for it, and you get gaslit until the next election.

I worry about this most about our people, it doesn’t help to allow ourselves to be vulnerable to everyone, we need to take care of ourselves, because we are taking care of others, and you cannot risk their lifeline, the policy you work toward for them, by leaving yourself vulnerable to exploitation.
Those that rely on you will be affected most.

Aside from that, we know how this plays. Today we lose our policies, tomorrow we get blamed for our shortcomings.

Remember, Congress didn’t need us, and passed it anyway.
That means we don’t have to claim responsibility for a damn thing!
If they blame us for anything, it should be an easy deflect, just repeat what our polices are. They will be missing and it will expose this bill for what it is.

After more that a few deep sighs of disappointment, I’m reminded of what the philosopher Jagger once said, “You can’t always get what you want, but if you try some time, you just might find, you get what you need.”

While we didn’t even get all we need (yet), we must keep advocating and fighting for a more just and equitable world.

I love it, thank you for the enlightening insight, I got a good for you! Or at least my present state of mind, “It’s not the load that breaks you down, it’s the way you carry.” I will keep these both in mind as well as, “knowledge is to speaking as wisdom is to listening”, sorry I love quotes please feel free to share more

I agree entirely! Non-violence is an ideal I agree with. But I do not agree with kissing the hand that consistently slaps us in the face. Respect and courtesy are earned , and not one Republicant as earned either from me. We are far past the point of reaching across the aisle and unity. No more bending over and letting them do as they will with our asses exposed. Let’s pull up our big boy pants and show what power is in the correct hands.

I thought the recent interview between Cenk and Rep. Ro Khanna was a missed opportunity. Cenk should have given Khanna a little more response time. He barely had enough time to say one word before Cenk was on to the next topic. I truly wanted to hear what the Congressman had to say. We had a chance to listen to one of a very few Progressive politicians, and I believe, since he was willing to come on TYT, he should have had more time to talk to us. I doubt Ro Khanna will ever accept another invitation. AND, I think Cenk needs a refresher course in common professional courtesy and communication. I REALLY wanted to hear what the Rep 's future goals and plans were. Now, I have nothing to judge Mr. Khanna by. This same over-talking thing happened one of the first times Nina Turner was on the show. It’s no wonder why this man was the only progressive to accept the invitation to speak with Cenk. The purpose of an interview is to get to the bottom of what the interviewee’s plans are, to get answers. I don’t think I heard anything but stammering from Khanna. Maybe Ana could do the next politician interview, assuming there is one. I am sorry that I seem harsh. I gave it a night, and still agree with everything I have written.

I do have to kindly disagree, think his emotion was necessary, etiquette has been thrown out the window, common decency is more of the route we need to take. Change is not happening, why take a refresh course on something that from rudimentary level needs to be addressed, but word play which you saw exactly is what he trying to do until Cenk called him out, I think we earned a little time to talk out of turn because we remain static. New measures, new approaches, and most of all common courtesy. Honestly I don’t agree with any of enigmatic system we have, it’s meant for loop holes and diverging from subjects. Naahhh Cenk did his thing!!

The problem is we really should have had this conversation weeks ago.
It’s a lot to digest, and in reality, what you want is to give them foresight so that they have that perspective as negotiations are happening; especially at the end of negotiations because that is when fast balls start flying.
We want our politicians to catch the con being set up, it’s hard to see it when you are actually in the trap.

At the same time, we did try to tell Jayapal, there is little excuse for people that aren’t even trying to see, let alone doing.
We are making excuses to why they didn’t respect anything we had to say.
If anything, I’d at least mention it, to the party, to Progressives, to anyone about the slight doubt, or voice concern over opposition of constituents… the majority base of the Progressive Party?
I guess.

We’ve earned our say, I have only been with TYT since the beginning of the pandemic, that alone was my vetting, and I can’t imagine the hardcore watchers since the Iraq War!

What I would give to have had TYT during the Iraq War!
I shook family stability over that damn WMD!
Mass destruction indeed!

I appreciate all of your takes on the interview. Thanks for engaging in this important discussion. Overall, I’m happy that we got the interview and I give mad props to Rep. Khanna for coming on. To me, part of being progressive isn’t JUST the policies we fight for, but the way in which we do it, part of which is to engage in discussion (not simply debate) even when we disagree… explain your position, and truly listen to others’ concerns.

One of my weaknesses, which is also one of my strengths (as these things tend to go), is that I can easily see and understand all perspectives. As a result, especially after working with so many legislators around the country, I understand a lot of where Khanna comes from, even if I don’t agree with all of it. There is always so much more that goes on behind closed doors. Same thing with Cenk and him getting heated and passionate. As I think that @ijedi is pointing out - Cenk has been doing this for soooo long that he has far less tolerance for the continued naivety and soft-ball approach to politics. He knows exactly where that leads. I will say, it’s not easy having a conversation like that, in public on top of it, with someone that you ultimately like and respect. Cenk and Khanna have done several interviews together and have gotten to know each other. It can be really hard to call someone out when you’ve built a relationship with them, which is part of why progressives get into office and then go soft. To me, Cenk may look pissed and passionate (because he is), but I do think that takes a sort of strength and integrity.

I could write at least a chapter going into the specifics of what I mean, but ultimately I’m glad we had the interview. I think Khanna is a strong enough Rep. and person to come back on again. I hope others will follow his lead. These Reps face WAY harder interviews on corporate news where they are blamed and hammered and talked down to with their words and actions twisted at every turn. At least Cenk is an ally. It helps, though, if the progressive community shows support in this way. If any person, regardless of whether they’re a legislator, gets nothing but hammered by the audience when they take an interview, then it of course won’t be worth coming back.

Even if it seems like Khanna is stuck in his position, I have no doubt that what Cenk said will stick to some degree, and hopefully work its way into their closed-door meetings. Legislators wouldn’t come on to our show, or avoid our show, if we weren’t making a difference. And that is the real takeaway for me in the midst of yet another let down.

that was probably the best response I’ve seen you ever wrote my guy, now that communication!!!

Allison I love your olive branch, and I’m 100% with it, at the end of the day we are individuals that have daunting tasks, being able to fight against human nature is no simple task, we all hold passion and emotion linked to our endeavours. Simply leading to complication in keeping it in check, as in our own emotions and compassion towards others. To just listen, but to also have patients to decipher and offer a helpful delineation, while putting you own needs on the side for moment. This is very difficult because most of the public isn’t heard, leading to sense of wanting to just yell our standpoints. Just remember come from a place of care and compassion, and have patience not only listen, but decipher another full ideology, it may lead to epiphanies of your own.

Geez, Guys! All I truly wanted was to hear what the Progressive Representative had to say. The only other P.R.'s I have heard speak were a couple of The Squad members. I’d like to know what our diplomats(?) are speaking about and towards which accomplishments they are aiming.

lol again message wasn’t meant to criticize your response, I love to hear others perspective to better my own

Ro Khanna is a good person. Really good with legislation. But he still has the same problem most of us had at one point in our life. We naively trust people who haven’t earned that trust.

I wrote him after and told him that I supported him but that he hurt progressives. That by doing this the BBB bill was basically dead and that I hope he remembers this lesson. Because by doing this he hurt all of us.

The news assault after the infrastructure bill against progressives was like a nuke went off. The NY Times was full of trolls, vitriol and toxic nonsense about moderates are the center of the universe.

Basically after they got what they wanted the mask was torn off and their true toxicity came out in spade to attack those of us they hate for whatever reason.

Good guy. Really like him. Still support him. Just hope he learns that if you give you your leverage you no longer have a say in decisions. So they wasted all that time for nothing when they gave up their leverage.