What are you passionate about?

Reply to this post and tell me about yourself, or start a “topic” just like this one!

Very inspiring. I believe the world is waking up to this, including myself. The more people lead the way, like yourself, the more we will see this gentle and necessary awakening.

Our creator I believe does not like spending much time in large cities.

Probably some truth to that. Jay Shetty, former Monk and now self-help guru, says he lives in L.A. because it is in big cities where we need god the most.

I love what you said about education and birth and all things natural to the newly-welcomed spirits. I feel the same. Much of it I discovered while teaching in the public school system.

Our app does needs some improvements. Sorry about that. You can watch live on your phone through our website and still comment though. Hopefully that helps until we have the resources to improve the app. It is on our list!

Thanks for keeping us honest, and supporting us in all the ways you do. Even being here to connect with other community members is a great contribution – as you know.

“Wonder is the beginning of wisdom.” ~ Socrates

Social Justice. I went to school to go into law enforcement. Something happened along the way though, in my criminal justice classes I saw a common thread. I learned firsthand about the War on Drugs, the disparity in sentencing guidelines that adversely affected people of color (esp Crack vs Powder Cocaine in the 80’s), how many poor & minority folks can’t afford good representation relying on public defenders (many of whom talk them into plea deals because they have such a big caseload and it gets the prosecution a conviction for the DA who many public defenders aspire to have a job with).

There are mass levels of corruption in many departments but if you dare speak up and report it, you’re often met with threats on your life or your family’s. Many times you either leave the profession or become corrupted by the pressure of your peers because your fight an uphill battle.

The New Jim Crow was an eye opening book we read in one of my classes and I highly recommend it to anyone interested in Social/Criminal Justice.

The worst thing to me was the use of force and harassment of people of color for such minor offenses or not even doing anything but racist officers creating this sense of danger in their fragile minds.

I want to see a whole new system that abandons the existing bias and privilege. I couldn’t go into the field because I didn’t want to become what I hate or have my familiy’s lives threatened because I reported corruption.

My studies actually led me down the path of being a progressive/leftist. Bernie’s message spoke to me and told me I wasn’t alone. I knew I wasn’t a Republican like my parents were but didn’t feel comfortable with how many mainstream democrats were either!

You didn’t overwhelm me at all. I started typing this response yesterday but got pulled away.

I have struggled with this journey and can remember that struggle in my head as young as 5 years old (quite possibly younger). In a nut shell –

Raised Baptist on mom’s side, Catholic on dad’s side. Went to Baptist school for 11 years, until my first public school for high school. Constantly in trouble and made fun of for having genuine questions about creation and purpose.

About 17 years old, I became full atheist, rejecting God and any type of spirituality, but broke up with God in a prayer in case I was wrong (call it Catholic guilt).

Started studying world religions. Learned about agnosticism and decided to claim that as insurance.

Continued to be surrounded by angry, mean, hypocritical believers and finally, officially announced my rejection. Broke my mother’s heart. She begged me to get baptized anyway so that she didn’t have to live in eternity without me.

When I was 19, my dad died pretty suddenly. About a year later my grandma died after a year of intense pain (she helped to raise me so that my mom could work). Less than a year later, my nephew died in a car accident. Starting with my dad dying in my arms, I witnessed what I then KNEW was something unexplainable. I witnessed again with each death thereafter.

I then started to learn so much that is still so new, yet old as time and transcends it (we have lost our way but are finding it again), that many people on the left are still afraid to talk about it for fear of being accused of being stupid, illogical, etc. It’s unfortunate, but is part of the natural progression of enlightenment. I am hopeful.

Anyway, I could go on and on but must take off for now. Just wanted to share that I loved reading about your experience and appreciate you sharing. It’s beautiful and gives me hope.

What an intelligent, conscious, compassionate being you are.

It’s amazing how many of our TYT Community I meet whose parents are Republicans and who were raised religious, but had to find the strength to follow their own path which led them to becoming progressive. That is also my story. Clearly there is an awakening happening and it’s exciting to know that we’re in it.

I minored in Sociology and learned a lot about what you talk about as well. It was really validating to me because I was learning about things I always “knew” but was never exposed to outside of my own knowing (my dad’s highest education was 7th grade and I am the only one in my family to graduate college, 8 brothers and sisters). Higher education pulled me out of a very dark place to know that I am not crazy and that there is a long history of people fighting for justice.

I became a teacher because of how much education saved my life (quite literally). Our education system is majorly flawed, but there is so much potential for a bright future where education helps people to explore and learn according to their own nature. So glad you found yourself, and us.

P.S. I added that book to my reading list. Thanks!

I am so sorry. I made a lot of mistakes along the way. I learned as I was teaching, but I have discovered so much more since then and would really like to understand your experience and perspective. If you would be interested, I am more than willing to hop on the phone. If not, I completely understand. Thank you for letting me know. I wish you all the best and send you my sincere apologies. I hope you find the healing and love you deserve. If I can help to be part of that by hearing you out and learning from you, please let me know.

Your link doesn’t work, but I think this one does it: Scientists Reveal LSD Flattens the Brain's Energy Landscape

This is really interesting. I thought that LSD wasn’t on the list of permissible drugs to be studied. Glad to see that more official research is coming out about how it works.

Do you know if the release of those traumas on LSD leads to healing, or makes things worse? I imagine it depends on the person and what they do with that experience afterwards.

I would like to say that I am passionate for psychedelics and you are already talking about it!!

Meditation + medication. I would love to go deep in it. Cheers for Doctor Claudio Naranjo, a wizard psychedelic psychiatrist that helped me open my heart 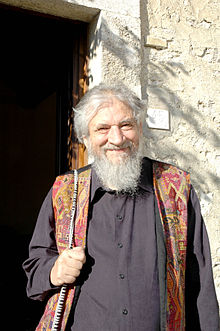 Claudio Benjamín Naranjo Cohen (24 November 1932 – 12 July 2019) was a Chilean-born psychiatrist of Arabic/Moorish, Spanish and Jewish descent who is considered a pioneer in integrating psychotherapy and the spiritual traditions. He was one of the three successors named by Fritz Perls (founder of Gestalt Therapy),[citation needed] a principal developer of Enneagram of Personality theories and a founder of the Seekers After Truth Institute. He was also an elder statesman of the US[citation neede...

Never heard of him. I’ve bookmarked this to learn more. Thanks for sharing. I love that: “helped me to open my heart.” Spot on.

Wow I was going to just write a little blurb but after seeing all of your posts, I’m embarrassed.

I was going to say that I am passionate about making sure my daughter and children, have a better world than I have, and have better opportunities that generations before them had.

I want to bring the progressive message to the Latino community to ensure my community knows how progressive policies will help here in the US, from immigration to jobs that ensure employers are not abusing us do their immigration status!

And this is just me, but that message can then spread to the rest of Latin America where people can rise up and change their counties for good.

And maybe that’s just grandiose thinking, but that’s what I want.

Wanting to create positive change in the world within your lifetime for the next generation is most certainly nothing to be embarrassed about. There are philosophers who have argued that this is our purpose as mere mortals. I have always loved how passionate you are about bridging the divide between progressive politics and the Latino community. So glad you’re here to help make that happen!

I am extremely passionate about learning, studying, and anything else about history, specifically 19th century and even more specifically, World War Two. I love learning about the relatively recent catastrophic, influential, and life-changing events that occured and still affect our lives today. And the many lessons we can learn from it all. As well as respect those who lived through those times and experienced the events firsthand. It is an amazing and awe-inspiring adventure to learn about it all, horrifying and depressing at times as well, but I do enjoy it. Additionally, and most recently, I have become incredibly passionate about political activism and educating myself and others about the reality of current events and, (my opinions) on how to solve them.